In order to raise public support for racial equality in Hong Kong and to celebrate the United Nations’s International Day for the Elimination of Racial Discrimination (IDERD) on 21 March, the Equal Opportunities Commission (EOC) has launched a city-wide campaign in March to promote racial integration through advertisements at MTR stations, public events, talks and seminars. One of the highlights of the campaign is a public education event entitled “Equal Opportunities Diversity Project” co-organized by the EOC and Radio Television Hong Kong Radio 2 (Radio 2) in Lok Fu Place today (10 March 2018).

Proclaimed by the United Nations in 1966, the International Day for the Elimination of Racial Discrimination is observed on 21 March every year, aiming at raising awareness on racial equality in the international community, eliminating racial discrimination and realizing the spirit of “All human beings are born free and equal in dignity and rights” as stated in the Universal Declaration of Human Rights. Throughout its history, Hong Kong’s rich mix of cultures and backgrounds has propelled us to innovate and grow. Yet many are still unable to equally access or contribute to this city’s future because of unjust stereotypes and discrimination. Discrimination is everyone’s loss, for together, our possibilities multiply to the benefit of all. Therefore, the EOC promotes racial equality and integration every year through the IDERD.

“Though the Race Discrimination Ordinance has been enacted in Hong Kong for almost a decade, the ethnic minorities in Hong Kong still face different forms of discrimination. The EOC has always been responding to the concerns of the ethnic minorities through the integrated strategy of policy advocacy, public education, training and outreach. The EOC launched the EMbRace campaign last year to expand the scope and channels of our outreach work through the use of social media and connecting with corporates. As important as the EOC’s work is the support from the government and stakeholders in different sectors. I am very glad to learn from the recent Budget that the government will implement measures to strengthen the support for ethnic minorities. I am pleased to see that people from different sectors have spared their time to join us today in promoting racial equality,” said Prof Alfred CHAN Cheung-ming, Chairperson of the EOC.

About 200 participants attended the event today, including Legco Members, officials from government departments, Consul-Generals, heads and representatives from NGOs, and leaders and advocates of EM communities. Apart from sharing sessions on issues related to the elimination of racial discrimination and equal opportunities, other highlights of the event included cultural and singing performances.In addition to today’s event, the EOC has lined up a series of events in March to further promote racial diversity. The EOC has arranged for large posters to be installed at MTR stations from 9 March for two consecutive weeks to make the messages of racial diversity and inclusion visible. The EOC invited Mr Jeffrey Andrews, the first registered Indian social worker in Hong Kong, to share his experience of racial integration in the city with a group of secondary school students on 7 March. As for the business community, the EOC has lined up a seminar on “Corporate Role in Promoting Racial Diversity” on 21 March with the support of HSBC to encourage business of all sizes to take positive steps of promoting diversity in the workplace, and notably increase the employment of EMs. Meanwhile, the EOC is going to announce the findings of a survey on kindergarten admission and practices on 14 March. The survey will cast the spotlight on the education issues facing children of ethnic minorities. 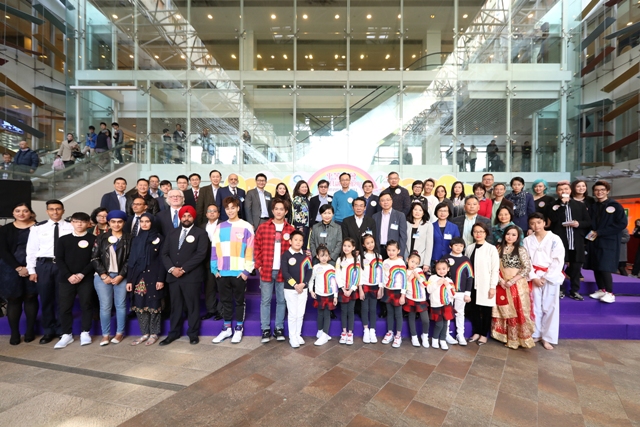